You may have heard about recent presidential aspirant Rick Santorum’s daughter, Bella, and her battle with a rare birth defect. That defect goes by the name of trisomy 18 (pronounced TRY-so-mee 18), also known as Edwards syndrome. It is similar in its genesis to defects like Down syndrome in that it means the person who has it has three of a particular chromosome instead of the usual pair.

As you may know, Rick Santorum has spoken out against the widespread use of contraceptives. And he delights in all that Bella has given the family. Nevertheless, the poor girl has been in and out of hospitals for various ailments that accompany her condition. In fact, it is rare for Edwards babies to survive to their first birthday. Their symptoms include:

Bella just got out of the hospital on Monday after being treated for double pneumonia, which she battled in January as well. The long-term outlook for anyone with trisomy 18 is poor. In any case, she will never be self-sufficient.

Let’s move on to Michelle and Jim Bob Duggar. They have been famous for churning out almost one child per year since they married. 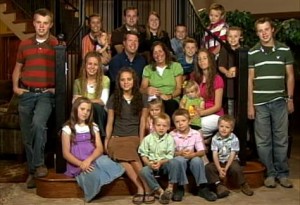 They even have a reality TV show about their profligacy. The Today show does irregular updates on how fantastic they are. But none of the media outlets seem to give a rat’s ass about the example they are setting by saying, in effect, “ecology be damned.”

But Michelle’s last two pregnancies have been disastrous. Michelle was 42 when her 19th child was born 15 weeks premature via an emergency C-section that almost killed Michelle and the baby, who weighed less than two pounds. Michelle’s 20th pregnancy, at age 45, ended in a miscarriage. While the Duggars believe that God has wanted all these pregnancies, we wonder whether they believe that God wanted them to take the risks associated with older mothers? But they’d better get back to the horizontal mambo if they want to match the gamblin’ Santorums. 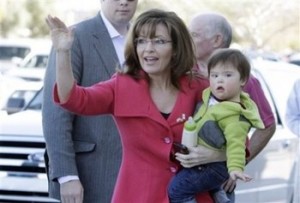 That brings  us to Sarah and Todd Palin and their brood. And if you think we’re ganging up on Republicans, hold onto your hat. Wait until we get to our final subject our final subject. Sarah Palin gave birth to their son Trig when she was 44. Trig was born with Down syndrome. The statistical odds of a Down pregnancy in a 44-year-old woman are greater than three percent.

The point here is that people are willing to assume the risks involved in bringing kids into the world for purely selfish reasons. In fact, there are no unselfish reasons for having kids. It’s certainly not done as a favor to someone who has not yet been born. And even when aware folks like the Santorums, Duggars and Palins know that advanced age raises the stakes substantially, they jumped right in without regard to what may happen as a result. It’s like gambling using someone else’s well-being as collateral.

So while Rick Santorum talks about all that Bella has given his family emotionally, we don’t wonder why he doesn’t speak of what he and Karen have given Bella.

You may not be familiar with Robert Kennedy, Jr. He is the son of the late attorney general, U.S. senator and presidential hopeful

Robert Kennedy. However, Kennedy, a devoted environmentalist and former candidate for the Democratic nomination for New York governor, has six kids. It escapes us how anyone who has devoted his life to protecting the environment can justify having that many children, both on the grounds of overpopulation and the gamble involved in creating children.

The Kennedy family history is rife with tragedy, from violent calamities, to scandal, to severe emotional issues, to mental disabilities. Robert, Jr. himself is a one-time felon who was a heroin addict.

We question the ethical and moral decisions of these families who don’t seem to consider the emotional and environmental hazards involved in their indulgences. Evidently, when planning more Santorums, Duggars, Palins and Kennedys, they are just not very conservative –  various interpretations of that word – about deciding there are enough of us. And they certainly haven’t thought twice about it.